Interstate Driving While Carrying A Firearm: What You Need to Know Familiarize yourself with interstate driving rules and laws. Know your legal obligation when carrying a gun as you travel.

RELATED: How To Travel Interstate With Your Firearm

For some, carrying becomes such a natural part of their life that they may not think twice when interstate driving. Carrying a firearm for personal protection is a choice.

Those who choose to carry knowingly subject themselves to interstate driving conditions and federal statutes. These statutes are necessary for they were written with the intention of protecting life.

Cases have shown that emotion-driven gun owners can make reckless choices. Consequently, these statutes continue to evolve with our society.

As you apply for a Permit to Carry in your home state, you only become familiar with your state’s laws and statutes. Here’s a common scenario across the United States every vacation season. A family goes out west for a camping trip.

Knowing they will be in remote and wild areas, Kyle decides to bring his handgun, 3 magazines, and defensive ammunition. Traveling from Pennsylvania to Montana, there are a wide variety of state lines to cross.

At this point, gun owner Kyle has to settle with one of three choices:

The first one happens more often than anyone would like to admit, and evidence of that negligence is shown in the TSA’s annual weapons confiscation reports. After personally interviewing TSA officers from across the country, most agents said that firearms are usually discovered because the owner forgot they had one of them.

What is TSA? TSA (Transportation Security Administration) is the government agency in the United States responsible for ensuring security in public travel.

The last two options play out if you consider doing the research as a responsible gun owner. However, even self-directed research can still leave too many questions about execution.

Read on though, and we can help with that.

Traveling from a Reciprocal to Non-Reciprocal State

If you do a search of your Permit to Carry reciprocity, you can get a snapshot of which states you can carry in. Using that, the only question is, what should I do with my handgun or firearm when I travel through a state my permit does not have reciprocity with?

These next two short stories will solve that for you as well.

Using online tools like this gives you an idea where your permit has reciprocity. However, these free resources can be outdated, so it is important to confirm with the states you intend to go through. 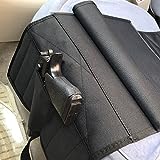 If I decide to drive to my parents in Indiana from Minnesota, I know I can carry in Wisconsin and Indiana, but not Illinois. Knowing this, I simply have to make the transition from ‘legally carrying’ in Wisconsin to ‘legally transporting’ before I cross the Illinois state line.

Carrying this out, I stop at the last rest stop in Wisconsin to get one last tank of cheap gas and start legally transporting my handgun.

Out of sight from any bystanders, I’ll unload my M&P Shield and magazines. Once my defensive ammunition is back in its factory box and secured, I lock my Shield up in a hard-sided case in the back of my car.

Ammunition is always separate and the firearm is secured to a seat frame if it’s bolted to the frame or floorboards.

There are a wide variety of ways to lock your firearm in your car. The easiest and legal way to do so is with a cable lock through the magazine well or cylinder and stored in a permanent structure in your car.

In a pinch, nearly any police department should have gun locks on hand to give to the public for free if they ask. Project Childsafe has been a large part of that, and you can find one of their partners through this interactive map.

RELATED: How To Fly With A Firearm Once I get through Illinois and cross into Indiana, I simply pull over again to reload my Shield out of sight and continue on to see my family. It really is this simple going through states you don’t have carry reciprocity with.

However, just because you have reciprocity in a state doesn’t mean your home state’s statutes are valid in the state you are visiting. It is on the individual gun owner to do additional research on interstate driving rules to see and interpret the use of reasonable force in the states they intend to carry in.

If the worst should happen, and you think you have to use deadly force, the decision-making process you are going through is likely to be in accordance with the statutes you are more familiar with. One of those scenarios that could play out would be a Florida resident applying ‘stand your ground’ or ‘castle doctrine’ decision-making to a defense of property in Minnesota.

In that case, the Florida resident and permit holder would be subject to Minnesota reasonable duty to retreat laws, which would find them losing their reasonable person or innocent party status.

You have to be familiar with the local laws and statues in the states you intend to carry in. Most of the time you only need to contact that state’s department of public safety or its equivalent.

From their website or call center, they can answer your questions on interstate rules. Here is a cheat sheet of what to say and ask:

You: “Hello, my name is [you] and I have a resident permit to carry in [your home state]. I know I have reciprocity with [state you’re traveling to, say, AZ], I just want to know where I can find information on [Arizona’s] permit to carry statutes and how they differ from my home state.”

The operator will either give you a quick briefing on the phone or redirect you to a website. Either way, that is the best way to get the information directly from the state.

At the end of the day, you are the face of the gun owners’ community whenever you carry. Being an informed gun owner helps raise that standard we discussed in the first two parts of this series.

Share your own experience in the comments below, we can always learn from other’s experiences.

None of this should be taken as legal advice. This is simply my professional recommendation as a firearms trainer and fellow gun owner. 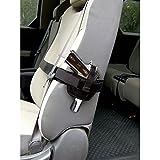 Watch this video by Guns & Gadgets on a bill that addresses interstate travel with firearms:

Flying with firearms was addressed in the first part of the firearms series. Almost by default, that begged the question, “what about driving across the country with my firearms?”

Given that flying isn’t for everyone, this is for gun owners traveling in private vehicles. That includes ATVs, motorcycles, cars, or even boats.

Public overland transportation like buses, ferries, and trains have additional regulations that you, as a paying passenger, have to follow. Again, this guide is specifically for gun owners traveling via private vehicles.

Have you tried carrying a firearm while interstate driving? Let us know in the comments section below!

Editor’s Note: This post was originally published in January 2018 and has been updated for quality and relevancy.

One Response to :
Interstate Driving While Carrying A Firearm: What You Need to Know